Just a quarter say they would be very concerned.

What is more, about half of the population (48%) have tried, or would try Horse meat ? As a marketer might put it, half the population are ?non rejecters? of horse meat.

Horses, like dogs are said to have a special place in the British psyche – we are unable to tolerate using them for anything other than sport or companionship. But our research suggests that canny marketers might have a lot more success trying to convince us to give horse a try than to chow down on a grilled pooch.

?Non-rejecters? of dog meat make up just 11% of the population. Even fewer than are prepared to consider eating insects!

In fact, with 48% of people being non rejecters of horse meat, this puts horses closer to unusual meats like Veal (68%) and Venison (72%) than Dog. 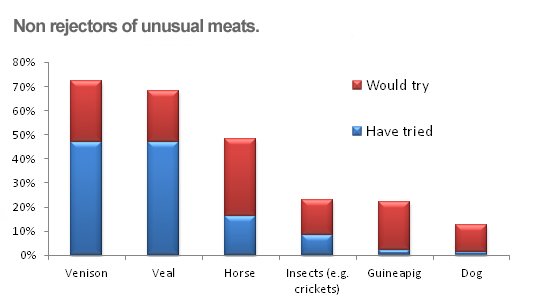 So in spite widespread outrage, it seems that when people know what they are eating, a reasonable proportion of people would be willing to give horse meat a go.

After all, in our research 87% of people who have knowingly eaten Horse say that they liked it.