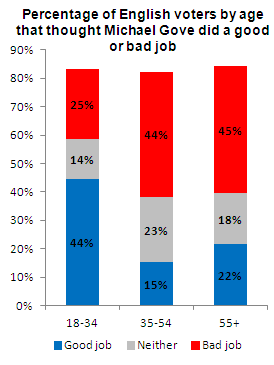 When we turned to some of his key policies, responses were slightly more positive. Although 43% opposed his policy of abolishing re-sits, over half of voters (57%) supported the curriculum reforms that would make history and English literature more ‘focused on Britain’.

However, implementation may still have been the problem, with 42% agreeing that Gove was unnecessarily combative in his dealings with interest groups, with 29% by comparison saying he had to be forceful to push through education reforms against resistance.

Opinium Research carried out an online survey of 1,491 likely English voters. Results have been weighted to nationally representative criteria. The research was conducted from 17th to 19th of July 2014.