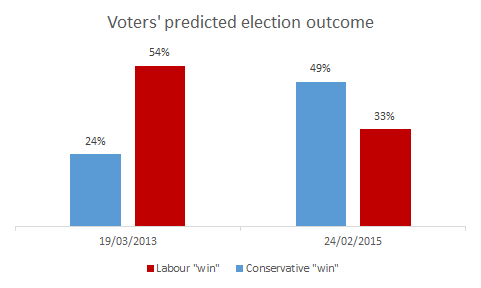 Back in 2013, when Labour was routinely recording 10-point leads, 54% of voters expected Labour to ?win? vs. just 24% for the Conservatives. Now that both parties are at parity, Labour?s figure has dropped to 33% while the Conservatives? has risen to 49%.

Among Labour voters themselves, the proportion predicting a win was 82% in 2013 but just 67% do so now. Conservative voters have gone from 60% expecting a win to 82% now.

To an extent this is just voters reading the polls and coverage of them which show that, even if momentum may not exactly be with the Tories, Labour have bled support across the country to the SNP, UKIP and more recently the Greens. This also feeds into who they expect to be prime minister after the election. Overall Cameron leads Miliband by 46% to 23% but while 75% of Conservatives expect their leader to stay at No. 10, just 47% of Labour voters expect Ed Miliband to replace him.

But Labour voters are also generally lukewarm about their leader in a way that Conservatives are not about theirs.

When we finally pushed voters to say whether they would want Cameron or Miliband as prime minister after the election with no other options available, Labour voters were a bit more enthusiastic with 84% choosing Ed Miliband but, still, 16% of them chose David Cameron.

Labour?s voters still broadly expect to win the election but not as much as they used to, not as much as Tory voters expect to, and they don?t support Ed Miliband in comparable numbers to the support David Cameron can count on from his side.

Paradoxically Conservative efforts to turn the election into a two-horse race between Cameron and Miliband may help Labour as the only time in the chart above that the red bar comes close to the blue one is when voters are forced to choose between the two.