Our survey carried out among 500 British 18-year-olds found that four in five thought it was too easy to accidentally view explicit images while surfing the internet, and 72% felt pornography led to unrealistic views about sex. Two thirds (66%) said that “it would be easier growing up if pornography was less easy to access for young people”. 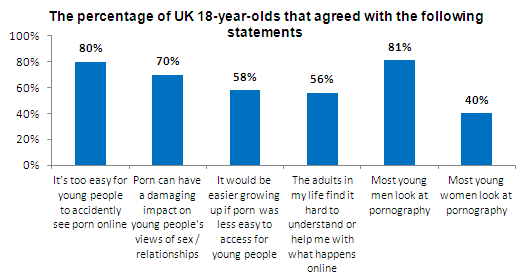 Although the results showed a high awareness of the issue among teens, it also highlighted how widespread the problem is. Just under half (46%) said that sending sexual or naked photographs was “part of everyday life for teenagers nowadays”, while 81% agreed that ?most young men look at pornography?.

To make the situation even more complicated, 56% felt that the adults in their lives such as parents, teachers and guardians find it hard to understand or help with online issues.

Find out more about the research in this article from the Institute for Public Policy Research.