The Conservative poll lead has dropped by one point for the second week in a row, with the party now 15 points ahead of Labour.

UKIP remains in fourth place on 5% (dropping 2 points), with the Lib Dems in third place on 8% (down 1 point).

Both the major party leaders have seen their net approval ratings rise slightly this week: Mrs May?s ratings have risen from +13% to +15%, while Jeremy Corbyn?s have risen from -32% to -28%. 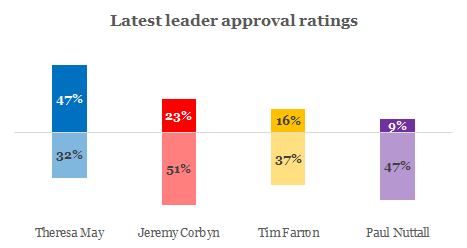