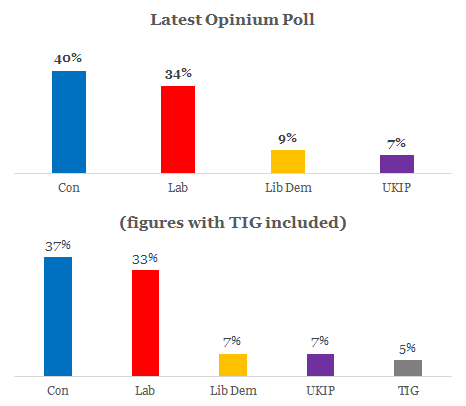 Theresa May now has a 15-point lead over Jeremy Corbyn as who is best prime minister (33% vs 18% respectively), the highest lead she has had this parliament. The net approval of Jeremy Corbyn’s response on Brexit continues to drop even further to a huge -49% (16% approve vs 65% disapprove). Now half (49%) of 2017 Labour voters disapprove of the way Corbyn has responded to the government on Brexit, while only 28% approve.

Support for Theresa May’s deal also continues to grow. Now 57% of OCnservatives voters want their Mp to back the prime minsiter’s deal, up from 51% a forntight ago. However, this might be because of real fears that Brexit might no longer happen or at the bery least be delayed. Now two in five (39%) UK adults believe that Britain won’t actually leave the EU in March, noticeably up from 24% a fortnight ago.