Labour and the Tories are now neck and neck, as Labour loses its small lead over the Conservatives.

The Conservatives are 40%, up one from last month, while Labour drops a point to 40%.

All the three main party leaders have seen their approval ratings fall. 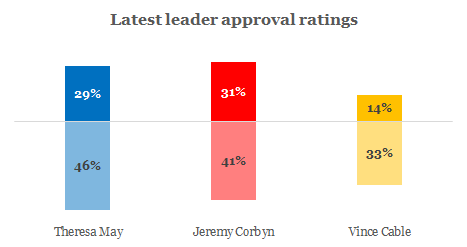 Looking to the future

Overall the public have a negative opinion of Donald Trump.†Just oven seven in ten (72%) UK adults believe that Donald Trump is a risk to international stability, while a similar proportion (71%) think he is untrustworthy.