Labour remain on 40%, while the Conservatives are down six points to bring them to 42%. UKIP are up five points from last month.

Theresa May?s leadership ratings have dived from -8% last month to -24%. Jeremy Corbyn?s ratings have remained stable, going from a net rating of -13% to -12% this month. 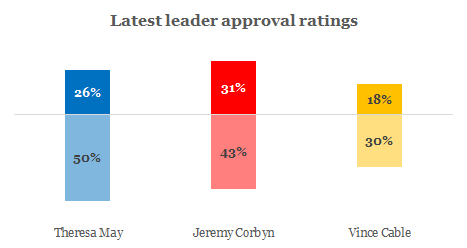 Theresa May?s lead over Jeremy Corbyn on who would make the best prime minister has dropped from 10 points to 4 points (currently it stands at 29% for May vs 25% for Jeremy Corbyn).

This is the smallest gap between the two since October 2017.

Currently 26% trust the Conservatives most to handle the Brexit negotiations compared to 20% for Labour. The Conservative lead of 6 points on this issue is the lowest it has ever been.

The Conservatives continue to be dented by Leavers appearing to lose faith in the party. Only 32% of Leavers trust the Tories most to lead the negotiations, the lowest level it has ever been.