Our latest poll released over the weekend is seriously bad news for the Conservative Party, and pretty bad news for Labour. But more than anything, it appears to be overturning some basic assumptions about how the end stages of the Brexit process were going to work out.

We have been anticipating at some point a Brexit-backlash. How often did we see headlines in papers about people changing their mind? As the debate went on the arguments became ever more intractable. It seemed like a perfectly fair assumption to make: the public would grow bored, irritated and/or regretful.

First off, many of the headlines around the public moving to Remain were premature. Up until early 2019 there was surprisingly little evidence of a huge shift in attitude. It became obvious that the options on the table weren’t palatable to every Leaver, but there was little evidence that this meant they had become pro-Remain.

The main evidence we have now is of public opinion hardening on both sides. For example, in late February 38% wanted the UK to go ahead with Brexit on the next scheduled date even if it meant a ‘no deal’ scenario, while a quarter (25%) wanted to cancel Brexit altogether and 24% wanted a delay to work on a compromise. 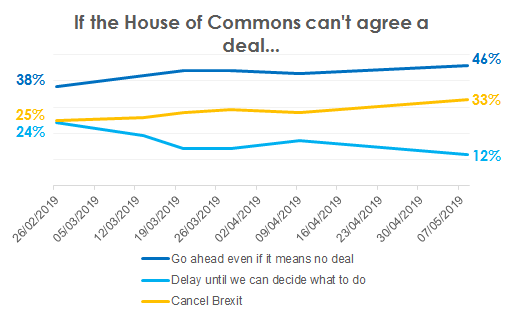 But Remainers and Leavers have hardened their position. Now 46% want the UK to go ahead with Brexit regardless of how it happens, and 33% now want the UK to cancel it. Only 12% prefer continued delay to find a Brexit acceptable to all.

On another metric we’ve tested, we find that frustration is driving a larger proportion towards ‘no deal’ than towards any other outcome. For the past few months we have given voters a binary option: if the Commons can’t agree on a deal, should we simply leave with ‘no deal’ at the next scheduled date or delay it further to hold a public vote on what to do next. In late February 44% preferred a delay for a second vote while 42% preferred a ‘no deal’ outcome. This has now swapped around: 47% would prefer a ‘no deal’ if the Commons can’t agree, while 41% want a public vote to decide on what to do next. 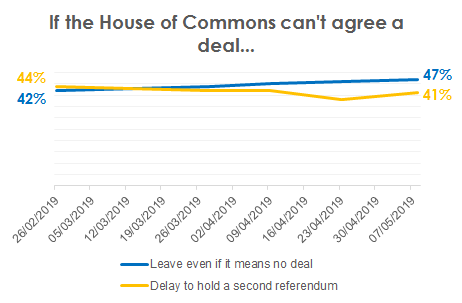 This is mainly because Leavers have become increasingly of one mind on this. A large proportion of Leavers have preferred crashing out for months (73% in February), but now an overwhelming 82% prefer this. This is especially true of (now former) Conservative voters: 91% of 2017 Tories that voted to Leave now think we should opt for ‘no deal’ if the Commons can?t pass the withdrawal agreement before October.

As the gulf in opinion widens between Leavers and Remainers, the Conservative Party and Labour Party will continue to fall through the gap. It’s hard to see how the current pattern established can be overturned before the 23rd May, unless something big happens. But what Labour coming out belatedly for a second referendum? Theresa May using a collapse in cross-party talks to pivot towards a managed ‘no deal’? Maybe. But both major parties appear rudderless and unable to respond to the demands placed on them by their voters.