The public at large most identified Labour?s previous record in government and Ed Miliband?s leadership (55% each) as reasons to not vote for Labour.

However, even among Labour voters a considerable 1 in 4 also picked Ed Miliband?s leadership as a reason to not vote for the party, more than any other option (26%) ? suggesting dissatisfaction with his leadership or a worry over his poor approval ratings.

Labour voters also highlighted the party?s stance on the EU referendum as a reason to not vote for the party (25%), suggesting a substantial number of Labour voters see the leadership?s present stance as a weakness. 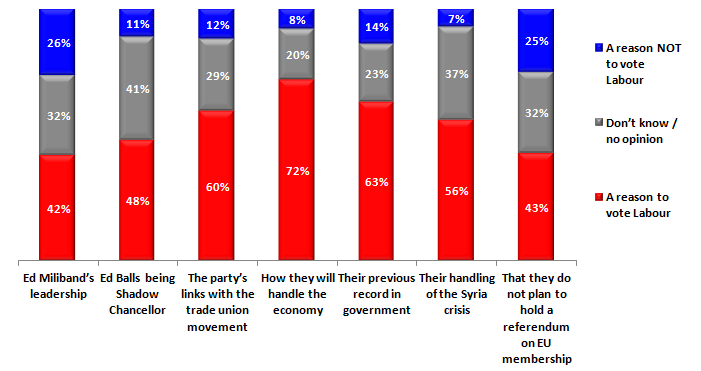 By comparison, the party?s links with the trade unions were not seen by Labour voters as a particular problem, with only 12% picking it as a reason to cast their vote elsewhere. This is confirmed by the 26% of Labour voters who said weakening those links would make them less likely to vote for the party, as compared to only 11% saying it would make them more likely to vote Labour.

Opinium Research carried out an online survey of 1,942 GB adults aged 18+ from 3rd to 6th September 2013. Results have been weighted to nationally representative criteria.