Result too close to call with one-point lead for Leave

Many of the usual patterns that we have found throughout this referendum campaign are still apparent in our final poll. Men are still slightly more likely than women to vote to Leave, and the older generation noticeably more likely to be pro-Brexit than the young.

But there are also some more interesting differences that we don?t often examine in detail due to the limitations of sample size. However, with the responses from more than 3,000 UK adults, it?s a great opportunity to dig down further into the results. The workers versus the retired Despite the one-point lead for Leave, the three fifths of our sample that are in some form of employment are opting to Remain, 47% to 41% for Leave.

Although retired and other non-working voters makes up a smaller proportion of the electorate, they are dividing noticeably more decisively in favour of leaving the European Union. In particular, the quarter of UK adults that are retired are opting for Brexit by 57% to 36% – a 21-point lead. This illustrates another dimension to the age divide; how the more isolated in society are more pro-Brexit, while those hyper-connected in a social sense, such as students, are pro-Remain. 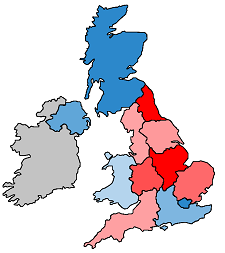 Regions: an alliance of the centre and the peripheryThere appears to be an interesting alliance of voters behind the Remain camp, combining those in and around the capital with voters in the Celtic edges of the United Kingdom. Behind Vote Leave is a mix of provincial England and down-at-heel urban areas, giving the Out camp solid leads in the Midlands and parts of Northern England. Perhaps one of the most interesting consequences of Scotland?s vote to stay in the UK is that in such a close race Scottish Remainers could keep England in the EU, despite a four-point lead for Leave in England. There is also a divide between within parties, most acutely in the Conservative Party.

If you draw a line from the Severn Estuary to the Wash, you?ll find that north of that line Conservatives are falling pretty heavily Leave side, even if in London and Southern England 52% of Tories are voting to Remain. How Britons are responding to progressive Britain Beneath the surface is how voters perceive one of the most prominent issues in society today ? racial equality and integration. Has society become too progressive on race? Or are we still a country where radical progress needs to be made on racial equality? One of the clearest drivers behind voting intention appears to be what side of the argument you sit on.

It appears that the group in the middle ? those who think recent developments in society on this issue are about right ? are very slightly dividing in favour of Leave. The almost exactly equal balance in opinions is why our polls are still pretty much showing a dead heat, while neither camp is clearly pulling ahead amongst the middle ground for us to say which side will be declared the winner on June 24th.