Half (50%) of GB voters thought the Environment Agency workers on the ground did their job well, although a rather large one in four (24%) still thought that they did their job badly. 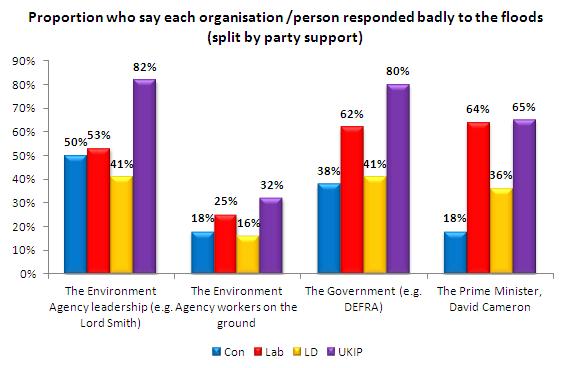 Most of the well known figures in the ongoing flooding effecting southern England come out badly, but some more so than others. For example, especially amongst Conservative and UKIP voters, the number saying David Cameron handled the floods badly was clearly below those that said the Government as a whole did their job badly.

Likewise, although a majority (59%) said the Government and DEFRA?s response to the floods was handled badly, it doesn’t mean that the Environment Agency are off the hook. A similar number (57%) also said that Lord Chris Smith and the Agency?s leadership responded badly.

We also found that a majority of voters (51%) see the recent floods as a sign of climate change or global warming.

Perhaps unsurprisingly, a large majority (73%) of Liberal Democrats saw the floods as an indication of climate change, while less than three in ten (29%) UKIP voters agreed. UKIP voters in fact were the only group where more people disagreed (45%) with this statement than agreed (29%). In a similar vein, 60% of 18-34 year olds agreed, while only 44% of over 55s did.

Opinium Research carried out an online survey of 1,696 likely GB voters aged 18+ from 11th to 14th February 2014. Results have been weighted to nationally representative criteria.