Crossover was predictable given views on the economy

Crossover was predictable given views on the economy

That?s the context in which to view this week?s Opinium / Observer poll which showed the Conservatives with a narrow 2 point lead for the first time since March 2012 and the ?omnishambles? budget.

Most polls still show a narrow Labour lead of 1-2 points, although there was an ICM poll which many dismissed as an outlier that showed a 4 point Conservative lead, so the overall situation remains that the two big parties are within the margin of error of each other.

Nevertheless, one reason to believe that things are starting to look better for the Tories is that voters are getting more positive about the economy. For the first time since we started tracking it in 2012 more voters say the economy is ?good? than ?bad? and more are giving the Coalition the credit than ever before.

There are two charts that spell this out. The first is trust on handling the economy: 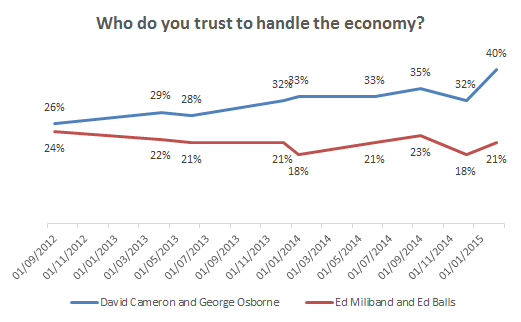 If we allow that this may be a slightly Tory-friendly poll (which is possible given sampling variation and margins of error), even taking a few points off David Cameron and George Osborne?s percentage still gives them a huge lead over Ed Miliband and Ed Balls compared to the near-parity that the two ?teams? enjoyed back in 2012.

The second is more complicated but one that we?ve seen before, the ?credit / blame? chart. As a refresher, this is based on asking voters whether they think the economy is doing well or badly and then asking who is more responsible for it, the Coalition or the last Labour government. The original intention of this during the double-dip of 2012 was to see whether voters thought that the Coalition was making things worse or just clearing up a mess they inherited.

Back in 2012 when all the talk was of double-dip recessions the Coalition was receiving almost no credit and a hefty amount of blame. At the same time Labour was riding high with regular 10-12 point leads. Since then, the ?blame? figure has steadily declined while the ?credit? figure has steadily increased leading to the situation today where there are more people crediting the Coalition for a good economy than blaming them for a bad one.

For a while the trajectory of those red and blue lines have been pointing to a Conservative lead at some point so it?s no surprise that it?s finally happened, especially given how close the parties are generally. The question though is what happens now?

Basic political science tells us that a good economy should be good for the governing party. The current situation where we have six ?major? parties competing for votes makes things more complicated but if we see more economic results like this then it?s fair to expect the narrow Labour lead in most polls to gradually be replaced by a narrow Tory one. The ‘cushion’ that gave Labour the traditional opposition lead over the government appears to be disappearing.