When we asked 2,000 UK adults what their religion was, just over half (54%) described themselves as Christian, with roughly a third (35%) describing themselves as having no religion.

When we asked what denomination they were, six in ten (59%) said they were Church of England, while 18% described themselves as Roman Catholic. 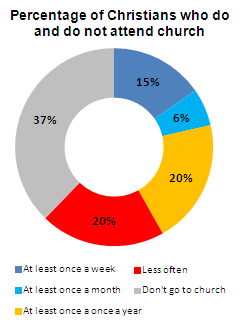 The results also showed an interesting generational divide. Far fewer numbers of the 18-34 age group identified as Christian as the older generation (36% to 69%), with 45% of the younger generation saying that they had no religion.

However, this was not reflected in rates of church attendance. Roughly a tenth of all age groups said they attended church at least once a week. This suggests a cultural phenomenon where many older Brits identify as culturally Christian without feeling the need to attend church, which among younger Brits has led many to simply not identify with any religion.

Opinium Research carried out an online survey of 2,003 UK adults aged 18+ from 11th to 14th July 2014. Results have been weighted to nationally representative criteria.