Before conference season began Labour were in the mid to high 30s, the Conservatives were in the high 20s / low 30s and slowly closing the gap while the Lib Dems were plodding along at around 8%.

In our latest poll Labour were on 36%, the Conservatives continued to close and are now at 31% and the Lib Dems remain at 7%.

Instead the real effect of the conference season has been within the two main parties as both David Cameron and Ed Miliband have shored up support among Conservative and Labour voters respectively.

The chart below shows net approval of each leader among those who would vote for their party. That is the percentage of Labour voters who approve of Mr Miliband minus the percentage who disapprove and the same for Mr Cameron among Conservative voters. 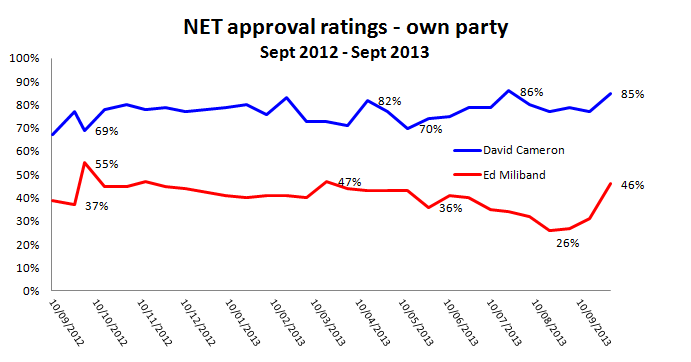 Both leaders have seen a post-conference boost but the change is particularly marked for Ed Miliband whose ratings have returned to where they were in spring before his gradual decline over the summer.
We’ve looked before at how the level of satisfaction among voters of a particular party isn’t always apparent in the headline voting intention numbers and although neither party has seen much of a “post-conference bounce” both David Cameron and particularly Ed Miliband can be satisfied they have made some progress over the last month.