Multiculturalism: a year on and a step in the wrong direction

Our multicultural Britain report in early 2016 showed encouraging signs that race relations were strengthening with almost half of ethnic minorities of the view that the UK†was a less racist country than 2 decades ago. †

However our recent study, run in January and released this week, sadly shows that number has dropped to a third. The impact of the Referendum seems to be unraveling some of this progress.

The number of ethnic minorities who feel that racism has decreased has fallen from almost half (46%) in our first report, to just over a third (38%) following the EU Referendum. White Brits†have reacted similarly. 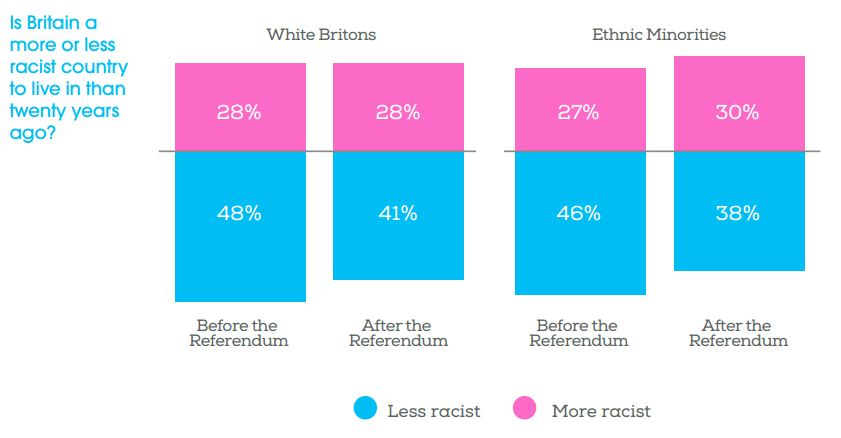 It is the overriding view across the U.K. (54%) that racial discrimination is still common in U.K. †with 64% of people from ethnic minorities having been a victim.

41% of ethnic minorities say they have experienced someone making a racist comment.

Unsurprisingly, the biggest impact has been on social media where minorities have noticed a significant change. Last year 29% saw racism on social media on a day-to- day basis, which has now risen to 37%, and rises to almost half (45%) of the younger generation (minorities aged 18 to 34).

Identity has also taken a hit with minorities. In our previous report there were encouraging signs of minorities identifying themselves more and more as feeling British. Sadly 36% say they now identify more with their ethnicity, compared with†being British, 30%. Asians in particular are much less likely to primarily identify with being British than before the Referendum (31% now vs 43% beforehand). 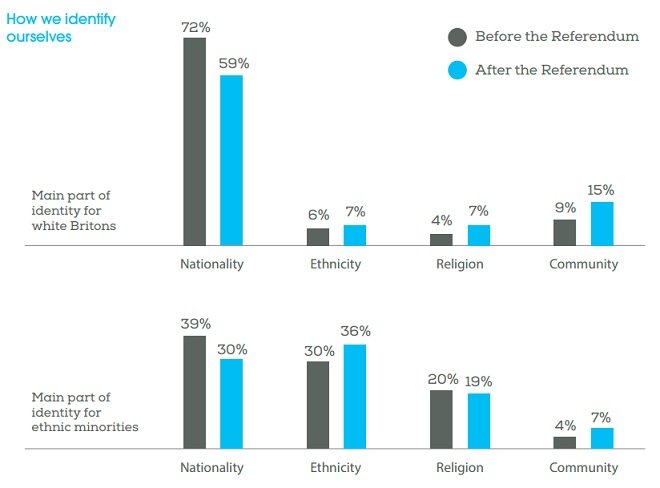 In terms of integration white Brits are less optimistic about the state of integration with 55% saying the U.K. is poorly integrated. Strikingly, ethnic minorities hold almost the complete opposite point of view. Half (49%) think the UK is actually an example of a successfully integrated society where different communities and cultures live and work together.